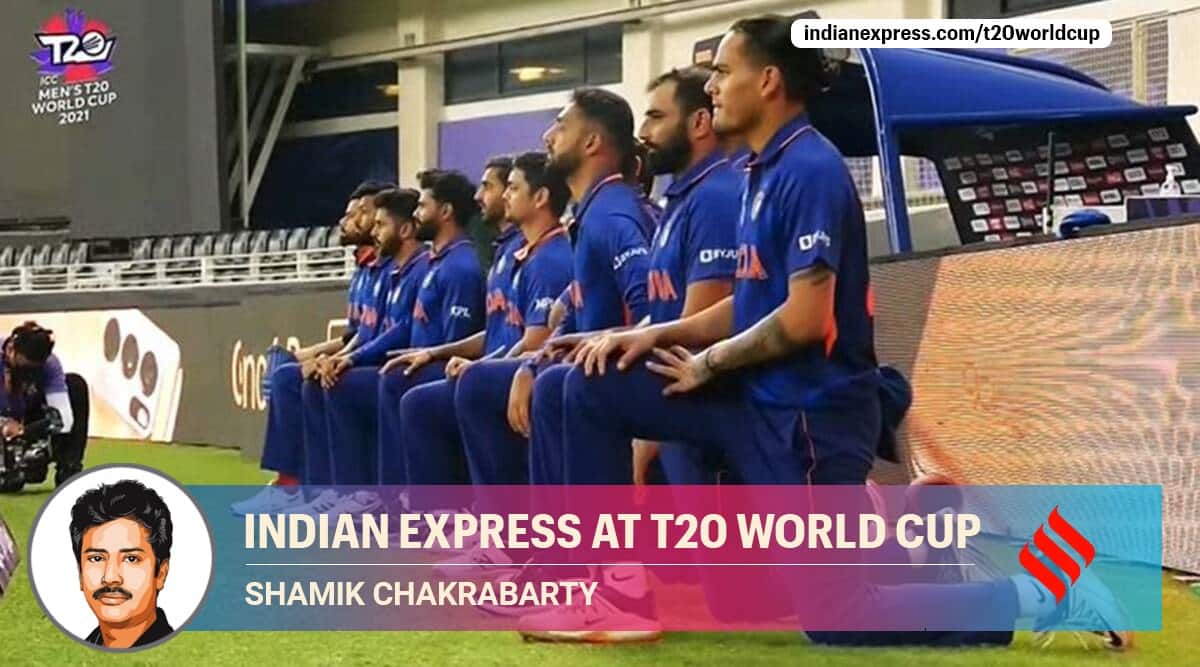 Teams at the T20 World Cup have been taking the knee after the International Cricket Council (ICC) offered them the opportunity to show their support against racism and discrimination. The ICC didn’t issue a directive in this regard, leaving it to respective cricket boards/team management instead to decide.

“After some teams expressed the desire to take the knee, the ICC offered all teams the opportunity to do so if they wished,” an ICC spokesperson told The Indian Express.

Accordingly, India decided to take the knee before the start of their match on Sunday, while Pakistan players had hands on heart.

Before that, the Super 12 opener between England and West Indies saw both teams take the knee. Australia and South Africa also did it before their tournament opener in Abu Dhabi, although as an ICC media functionary confirmed from Sharjah, Sri Lanka and Bangladesh didn’t do it ahead of their game on Sunday. At the same venue on Monday, however, both Afghanistan and Scotland took the knee before their game commenced.

As for the Indian team, once the BCCI approved the gesture, the team management informed the players about it. So, as Rohit Sharma and KL Rahul, the two openers took the knee inside the playing area, the other players did it outside the boundary rope.

“I was glad to hear and actually messaged Ravi to confirm what took place,” Holding was quoted as saying by Cricbuzz. The 67-year-old Jamaican has also written a book – Why We Kneel How We Rise.

At the post-match press conference, India captain Virat Kohli confirmed that the players were told by the management to take the knee. “That was communicated to us by the management. The Pakistan team agreed to pay their tribute towards the same cause, and then we accepted our side of things, as well. Yeah, that’s how it was decided,” he said.

Taking the knee in sport is about showing solidarity with the BLM movement. It’s practice has become widespread in sport, especially in football, since 2020 after the murder of African-American George Floyd in the United States. Cricket, too, followed suit, starting from the England versus West Indies Test series last year.

The ICC doesn’t allow players to display messages “relating to political, religious or racial activities”, but on the BLM movement, it decided to take a “common sense approach”.

“The ICC stands against racism and is proud of the diversity of our sport. We support players using their platform to appropriately express their support for a more equitable society,” the game’s global body had said in an emailed statement to Reuters in June last year.

“We will exercise a common sense approach to the implementation of regulations in relation to this issue and they will be assessed on a case by case basis by the match officials,” it added.

The ICC also calls its Anti-Discrimination Policy for International Cricket, introduced in October 2012 and amended in August 2019, “to widen the discriminatory conduct”, as “one of the toughest in world sport”.

Fast-bowling great Wasim Akram is delighted to see Pakistan end India’s winning run against them in the World Cup in his lifetime but...
Read more
Sports