BTS: Jungkook was worried he’d mess up My Universe, Chris Martin doubles up as cheerleader. Watch 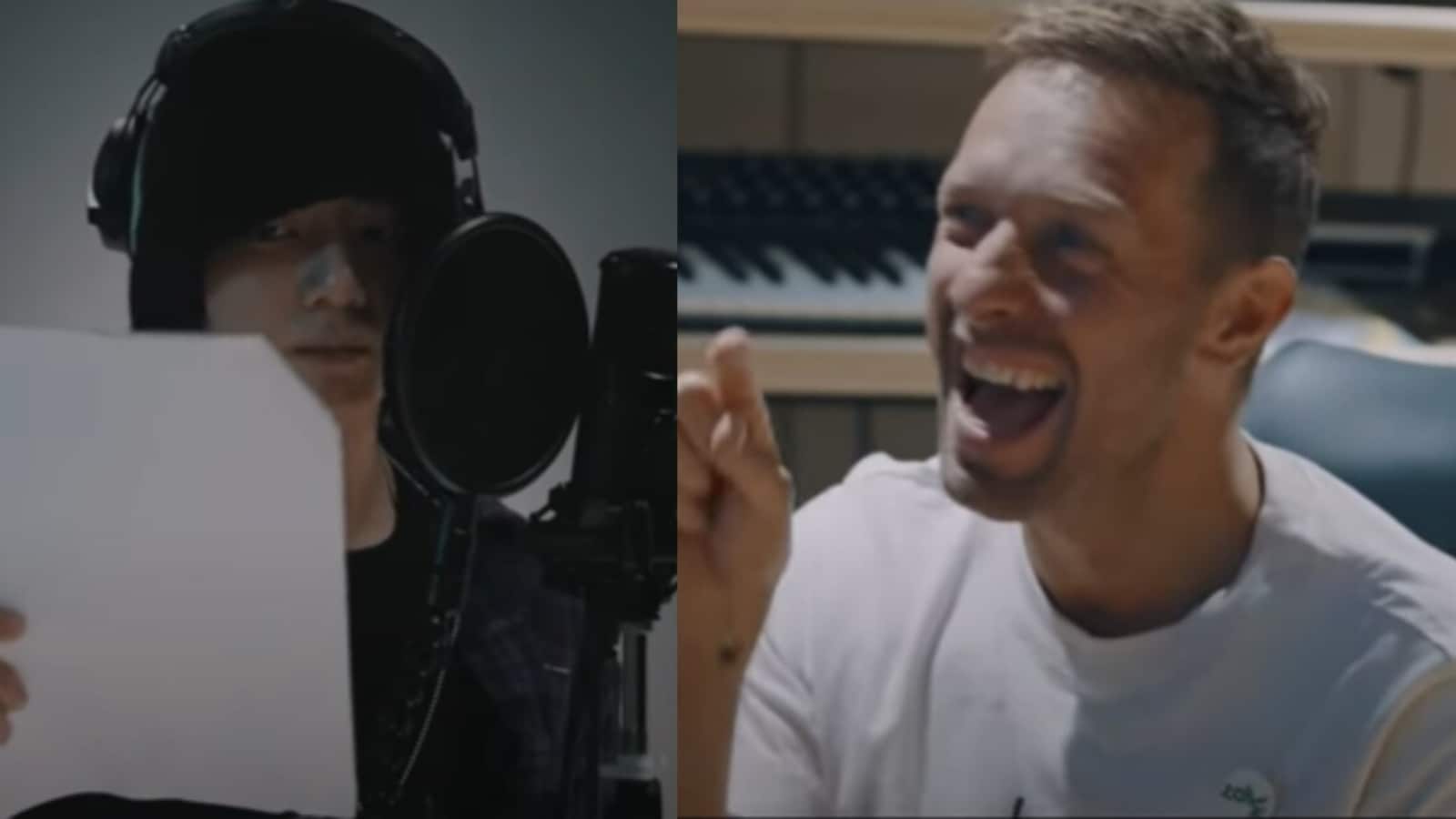 On Sunday, BTS released a documentary titled ‘Coldplay X BTS Inside My Universe Documentary’ which gave a closer look at how their recently released song My Universe was made. The video, shared on the K-pop group’s YouTube channel Bangtan TV, revealed Coldplay’s lead singer Chris Martin was approached by BTS about 18 months before the song was recorded.

“About 18 months ago, I got a message from somebody. They said BTS want to do a song with you. I said, ‘How? How would that work?’ I didn’t understand how that could be possible,” Chris said at the start. He revealed the title, My Universe, was something his friend once said and he thought it was a ‘cool’ title for a song and he then penned the track.

Chris travelled to South Korea for two days, bearing gifts for the BTS members, and recorded the song with them. While RM, Jin, Suga, J-Hope, Jimin, V and Jungkook were in awe of the singer, they were also excited to record the song.

“This song is all about us creating something together. That’s why Chris came here in person and recorded with us as well. I really loved the theme ‘not alone but together’,” V said. J-Hope added, “It could have been done remotely but we could add more sincerity to the song this way.”

As they each took turns to record their individual parts for the song, Chris doubled up as a cheerleader and encouraged them. When Jungkook was set to head into the recording studio, he admitted he was scared he might mess the song up. “It feels like when I first debuted. Chris Martin will be directing my performance and I’m worried I’ll mess up,” he said. However, Chris was impressed with him. “Please tell JK he’s so impressive,” he requested the translator.

Speaking about the lyrics of the song, BTS leader RM said that Chris told him the song is very personal to him as he was frustrated over not being able to perform live in concerts. “I thought about how to make this relevant to BTS. Since the lyrics go, ‘You are my universe,’ this song should definitely be dedicated to ARMY. I wrote the lyrics while picturing the day we reunited with ARMY,” RM said.

Chris added, “I think it’s very special to me that the most popular artist in the world speaks Korean and is like a group of brothers, not from the West, and it just feels very hopeful to me in terms of thinking of the world as one family. Then of course, when you see how they are as people and their songs, it’s really a message of togetherness and finding, being yourself, all the stuff I agree with.”

Also read: My Universe song: BTS and Coldplay sing about love in their highly-anticipated track

BTS and Coldplay released the song on Friday. Ahead of the song’s release, the members of both groups met in New York and posed for a picture. It was then revealed that BTS had gifted Coldplay with modernised hanboks. Later, Jin revealed he received a guitar from Chris. Coldplay and BTS debuted the song at Global Citizen Live, which took place this weekend.

For singer-actor Aditya Narayan and his wife, Shweta, who got married on December 1 2020, this will be their first Karva Chauth, and...
Read more
Music

The Chainsmokers Tease First New Song Since 2019 At EDC

It’s been over two years since we’ve last heard new music from The Chainsmokers, their 2019 album World War Joy. The group has been...
Read more
Music