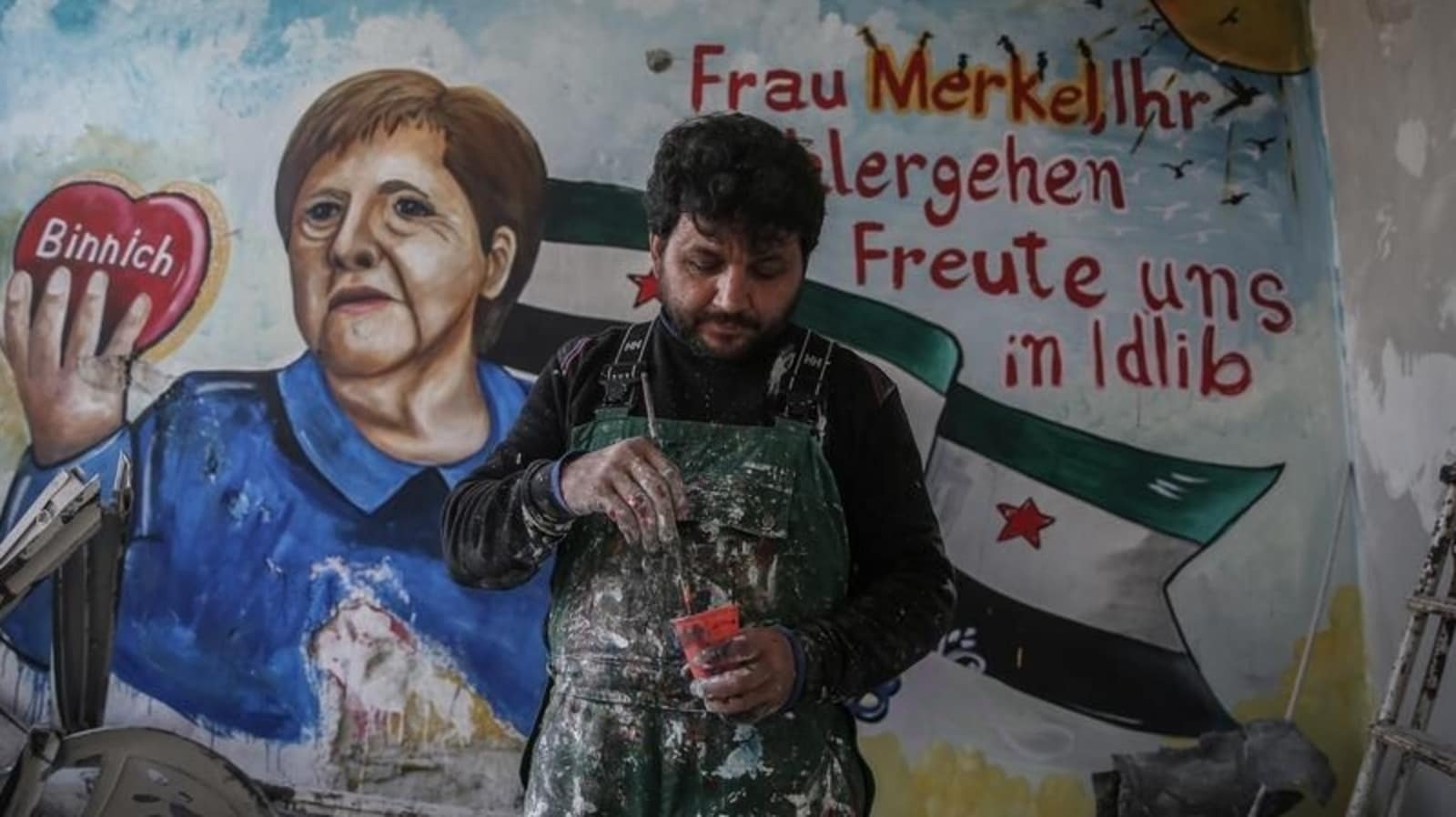 Idlib-based Aziz Asmar’s latest mural of the German chancellor is a token of gratitude and a farewell as she prepares to leave office following the election on September 26.

When German Chancellor Angela Merkel tested negative for COVID-19 in March last year, a mural of her was painted in a shelled children’s room in the war-ravaged Binnish district of the city of Idlib in northern Syria.

It depicted the chancellor in one of her trademark blazers, holding aloft a red heart with “Binnish” written on it. Behind her was the Syrian flag with a message in German that read, “Ms. Merkel, we in Idlib are happy about your well-being.”

“Angela Merkel welcomed Syrians and refugees from all over the world. She is a good person, and we wish her well,” artist Aziz al-Asmar had told The Independent newspaper then.

Together with fellow artist Anis Hamdoun, Asmar had painted this mural in a building that had housed a nursery for orphans, and which had been heavily bombed just weeks prior. He also recounted how children’s books and pens lay amidst the rubble as the two worked on the mural.

Merkel’s decision to open Germany’s borders to over 1 million refugees — many from Syria — at the height of Europe’s 2015 refugee crisis, had been lauded by Syrians worldwide.

“We wanted to compare her goodness to our supposed ‘leader’ Bashar Assad,” Asmar told The Independent.

The 48-year-old artist is currently working on yet another mural featuring the German chancellor, this time as a token of gratitude and a farewell before she leaves office following the German general election on Sept. 26.

A canvas on rubble

This mural of Merkel is one of the many that Asmar has painted against the rubble of bombed buildings in Idlib, Syria’s last rebel-held enclave.

He intentionally draws murals on the walls of destroyed buildings, he told Middle East-based media group, The National, last year.

“When we draw on the walls of destroyed buildings, we are telling the world that underneath these buildings there are people who have died or who have left their homes,” he explained.

He also gained international attention last year when he painted the now instantly recognizable profile of George Floyd, the unarmed black man who died after a police officer in Minneapolis kneeled on his neck for more than eight minutes, while Floyd repeatedly begged, “I can’t breathe.”

The video footage reignited painful memories for Asmar of how Assad had attacked Syrian civilians with sarin gas in the suburb of Eastern Ghouta in 2013.

“In those hospitals, the victims were crying and they were asking to breathe,” Asmar told Time Magazine in June 2020. Thus, he painted Floyd’s profile with his haunting final words on the remnants of what was previously a kitchen, before government airstrikes reduced the building to rubble.

“We’re trying to show that despite being bombed and losing people, and then being called terrorists, we still feel empathy. We still feel for people like George Floyd, who are being oppressed in other parts of the world,” he said.

Other personalities he has painted include deceased Argentine footballer Diego Maradona, and Jamal Khashoggi, the Saudi Arabian journalist who was murdered in 2018 in the Saudi Arabian embassy in Instanbul, Turkey.

Hope and solidarity through art

Hailing from a family of artists and calligraphers, Asmar teaches art to schoolchildren, and believes the murals can give people hope in the war-torn city.

He explained how people often come to watch him while he works, and how children take part in the painting. “They see a shelled building being revived, and it reminds them of what home used to be,” he told Al Arabiya last year.

His more recent works have focused on staying safe during the COVID-19 pandemic. But with severely limited medical supplies, and more than 70 hospitals already targeted by government-backed offensives since April 2019, he recounted how some people laughed off his COVID murals saying that the bombings in Idlib were deadlier than the virus. They have now however begun to appreciate the need for basic health precautions.

Determined that people not forget the Assad regime’s attacks on civilians even during the pandemic, one of Asmar’s mural depicts a green corona cell in front of a Syrian flag, with a bomb painted on each side. The message in English says, “The Al-Assad Corona is more dangerous to the world.”

“As activists, and as artists, we want to make it clear that we’re civilians, we denounce violence and we have a right to live with dignity,” he said.

New Delhi Oscillating between the permanence and the transience of the photographs, four Indian artists are exhibiting their experiments with the visual medium....
Read more
Art & Culture

A master stroke of abstractionism at this show in the city

New Delhi Art is a window into the minds of both its creator and its viewer. For over 50 years, veteran abstractionist Prabhakar...
Read more