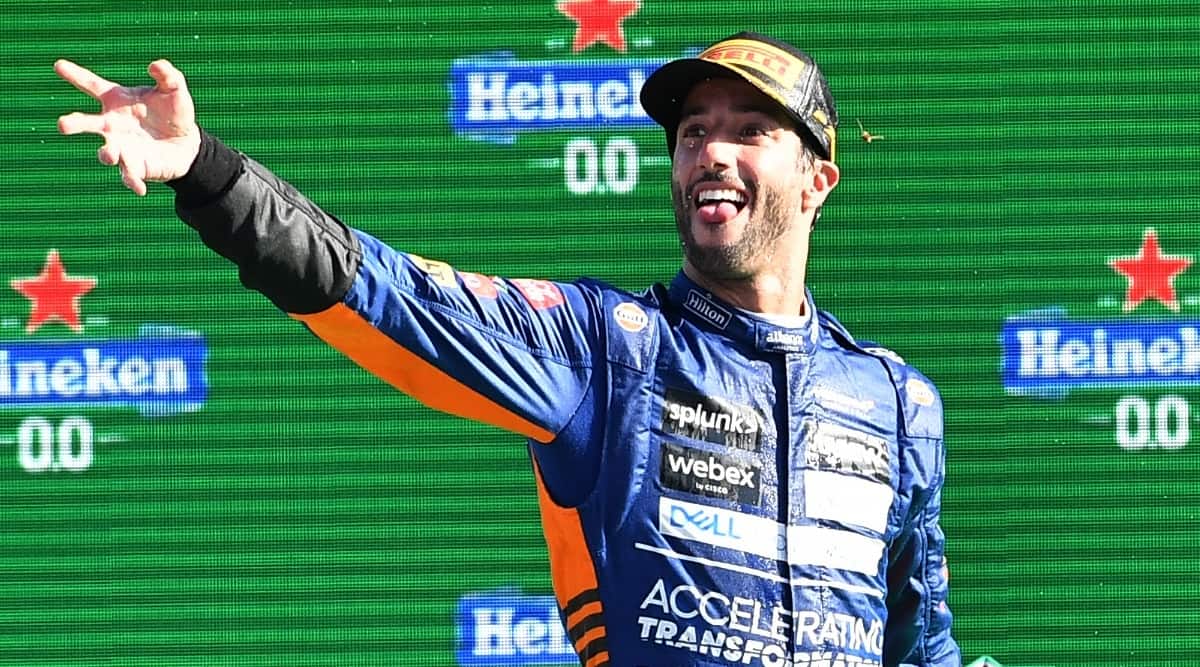 Championship leader Max Verstappen and defending champion Lewis Hamilton crashed out of the Italian Grand Prix, which was won by McLaren’s Daniel Ricciardo on Sunday.

It was McLaren’s first win in nearly nine years, since Jenson Button took the chequered flag in Brazil in 2012.

It was also Ricciardo’s first win since Monaco in 2018. He finished 1.747 seconds ahead of teammate Lando Norris and 4.921 ahead of Valtteri Bottas, who turned in a strong performance after starting from the back of the grid after a penalty for taking a new engine.

But the biggest talking point of the race came on lap 26. Hamilton had pitted from the lead and returned to the track just in front of Verstappen. The Red Bull driver tried to come up the inside on a turn as the seven-time champion defended his position.

As the two made contact, Verstappen’s car catapulted on to the top of the Mercedes as both slid into the gravel. The protective halo ring at the front of F1 car cockpits may have saved Hamilton from serious injury.

“That’s what you get when you don’t leave the space,” said a furious Verstappen over team radio.

Both drivers were able to walk away from their cars though Hamilton took a long time getting out of his, only clambering out after Verstappen had long gone.

The stewards will investigate the incident after the race.

Ricciardo won the race after a brilliant start allowed the Australian driver to pass Verstappen who started from pole position at turn one.

Behind them Hamilton, who started fourth, managed to pass Lando Norris. But he then attempted to try and get around the outside of Verstappen heading into the second chicane and was instead forced off across the grass, allowing Norris to regain his place.

“He (Verstappen) pushed me wide!” Hamilton exclaimed over team radio.

Hamilton was then held up by Norris and could only watch in frustration as Ricciardo and Verstappen stretched their advantage lap by lap.

A moment to savour for every single member of that team 🙌#ItalianGP 🇮🇹 @McLarenF1 pic.twitter.com/7w3v2WY5Ix

Ricciardo was first to pit, on lap 23, and came out seventh. Verstappen was struggling with his tires and stopped on the following lap.

But a botched pit stop that lasted 11.1 seconds saw him come out in 10th and, to make matters worse for the Dutch driver, Hamilton had in the meantime passed Norris to take the lead.

But disaster struck for both drivers shortly afterward.

Wanindu Hasaranga’s rearguard fifty was beautifully complemented by a clinical bowling display as Sri Lanka sealed their place in Super 12s with a...
Read more
Sports

The FIFA Council on Wednesday endorsed the holding of a global summit 20th December 2021 by videoconference in order to discuss the future...
Read more
Sports